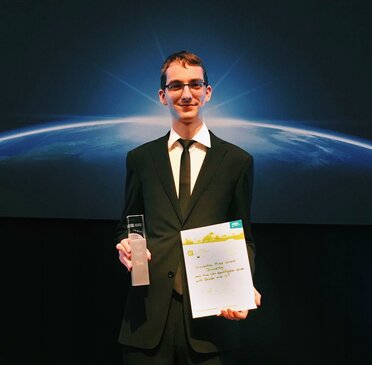 Lukáš Brchl began as an ordinary student at FIT CTU and when he submitted his master thesis, he had no idea that one day he would become employed at the faculty and manage a successful company, Dronetag. However, his interest in drones dates back to the early years of his studies.

“The final years of my studies were the most difficult,” explains Lukáš. “Already during my studies, I began working at the ImproLab at FIT and I have been working with drones for the last five years,” adds Lukáš, who specializes in drone innovations.

His career kicked off in November 2018 at the Space Application Hackathon, where Lukáš led a team of students that won in the Navigation category. They then set up a start-up called Dronetag together. Dronetag focuses on the development of small independent IoT devices for drones. FIT CTU has a professional drone that is used to test the devices. The key component of the whole system is a web platform and a mobile app in which users can monitor the surrounding drone traffic, for example. The drone is usually used with a high-resolution single-lens reflex camera for creating detailed 3D models.

Lukáš Brchl considers the main award in the international competition Galileo Masters his greatest achievement so far. He also organized the first Hackathon at CTU – HackFIT 2020, and participated in conferences including Future Port Prague, DronFest and DronEdge.