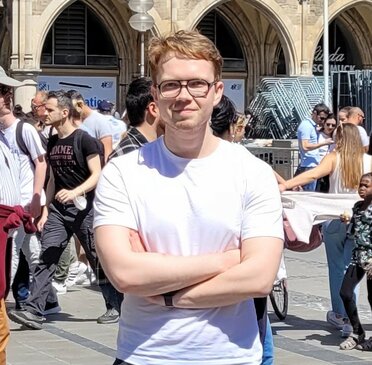 Askar has chosen Computer Science as his future profession while studying at the Academic lyceé in his home country. He has started learning programming a bit as an extracurricular activity and got really fascinated with it, so it was not a hard choice for him to make.

As it would be much better for his career to continue his studies in Europe, he started preparing himself for the CTU and had to choose between FEE and FIT.

“Studying at FIT gave me perspective on many areas and technologies of Computer Science, from data structures and algorithms to machine learning and computer networks. What’s more, it has taught me to process new material much more efficiently.”

Prague itself is a great place to find new ideas and great people to implement them with. Askar and his friends took part in many hackathons here and even got prizes in some of them. Askar was able to start his career before finishing his studies. He works as a part-time developer in Ricardo Software and also had a summer internship at Harvard Medical School.

During his last semester, he worked on his bachelor thesis, trying to improve the TNL library – a project of his supervisor. In February, he finished it and passed the State Final Examination with the highest grades. Apart from FIT, he was admitted to the programs at two universities – KU Leuven and the Technical University of Munich – which are among the world’s most highly-ranked technical universities. His current plan is to continue his studies in TU Munich, where he is going to focus on artificial intelligence, as he finds it both interesting to study and practical to use.